Lord of the Dance

I love the arts scene and community in St. Petersburg! I kept the camera at home for two reasons. Reason number one I wanted to enjoy the art and immerse myself in the arts. Reason number two I knew it would be crowded and it was not the time and place to be taking pictures. I enjoyed getting a taste of the museums in St. Pete.

A permanent collection of Dale Chihuly’s glass artwork. Includes the Macchia, Ikebana and Niijima Floats as well as Persians and Tumbleweeds. The Ruby Red Icicle Chandelier was a favorite of mine.

I am a big fan of Chihuly’s glass artwork!

The Museum of Fine Arts is within walking distance.

The Florida Holocaust Museum honors the memory of millions of innocent men, women, and children who suffered or died in the Holocaust. The museum is dedicated to teaching members of all races and cultures to recognize the inherent worth and dignity of human life in order to prevent future genocides.

On the 1st Floor. The exhibition presents the history of the Holocaust beginning with the history of antisemitism and life before World War II, followed by the rise of Hitler and the Nazis and anti-Jewish legislation.

“The Florida Holocaust Museum is home to one of the few remaining railroad boxcars used by the Nazis to transport Jews and other prisoners to places like Auschwitz and Treblinka. Boxcar #113 069-5 now rests on original tracks from the Treblinka Killing Center as a silent tribute to those who perished in the Holocaust and is featured as part of the History, Heritage and Hope permanent exhibition.”

“Boxcar #113 069-5, along with the rest of the boxcars, was the first place of death for many during the Holocaust. The bare freight cars often became a suffocation chamber for some of the people (100 or more at a time) who were squeezed into it. Those who survived the trip had to endure the journey under conditions of hunger and thirst, extreme overcrowding, and horrible sanitation. Many of those deported, especially the elderly and children died during the journey.” ~from the Florida Holocaust Museum website

“Tampa Bay remained racially segregated at the dawn of the Civil Rights era and many local institutions and establishments held out on integration for several years after Brown v. the Board of Education and the Civil Rights Act of 1964.

Under “Jim Crow” every aspect of African American life in Tampa, St. Petersburg, Sarasota and their surrounding cities was segregated.  Restricted covenants were in place that segregated residential neighborhoods.   African American children had to attend segregated schools that were under-funded and often in disrepair.  Blacks could only be cared for at “Black only” hospitals, and other public and private establishments like restaurants and beaches were often segregated – if blacks were allowed in at all.” ~from the Florida Holocaust Museum website

Had about an hour to see this museum before it closed and it was packed as well as a lot of information to see let alone read. I want to go back and do the audio tour.

I was curious about the museum building! I did a little research and learned the following.

I enjoyed the Photography Exhibit!

The museum is situated on the curve of Bayshore Drive overlooking the Bay. Beautiful Location!

The Dali Museum is home to the world’s most comprehensive collection of works by the late Spanish surrealist Salvador Dali.

I could have spent more time here exploring the intriguing and puzzling art!

Here’s to Celebrating and Supporting the Arts! Get Your Creative Side On!

The St. Pete Shuffle happens on Fridays from 7 to 11 p.m.! A St. Petersburg tradition since 2005. FREE, first come first served and weather permitting.

This is the hip and happening place to be on a Friday Night! Plus it makes a great date night activity too. I have never seen so many shuffleboard courts in one place!

I enjoyed trying it! We asked a volunteer to help us get set up on a court and show us how to play. Playing it is a whole new game once you have mastered the rules and scoring!

A Shuffleboard Court is 52 feet over all in length, 39 feet from baseline to baseline and 6 feet wide. Those dimensions were standardized in 1928 when the four-year-old club realized that it was time to end the confusion of rules that varied from club to club across Florida. A club committee worked out a standardized set of rules that governed not only the play of the game but the specifications of disks and cues, and the dimensions of the court. 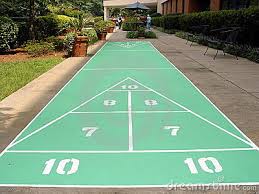 In 1927 the first clubhouse was built.  By 1929 the club had 2,588 members. The clubhouse was expanded in 1931. The membership roster in 1931 listed people from 41 states and two foreign countries; Canada and Scotland. In 1932 the club changed its name to the St. Petersburg Shuffleboard Club. In 1937 another building was added to accommodate the bridge club and social gatherings. In 1938 a new clubhouse opened for the club. The club reached 5000 members in 1944.

In 1994 the city’s historic preservation office designated the club, its buildings and courts a historic landmark.

Club membership was down to 35 members ten years ago from 6,000 members.

In 2005 a group of young artists, known as the The Artillery, took up the game and joined forces with preservationists to host Friday night games. The public was invited to play for free on Friday nights. Today the club has hundreds of members by introducing the game to a new generation.

I felt like I stepped back into time to the 1920’s! The strings of white lights dangling over a set of courts. Taking that first step into the club house to get some tangs and biscuits. Walking to the court for the first time with a volunteer helping us out and showing us the ropes. The green benches and chalkboards at each court. There is even a grandstand!

I am all for adventuring, especially when it is free and I can bring my own cooler! It is quite the workout too. I was sore the next day in finding new muscles while trying/playing shuffleboard!

Who is Up for Trying Something New & Adventuring On? Yes, Please!

CONSCIOUSLY CREATING WITH EVERY THOUGHT, WORD AND DEED

Adventure and Photography - Passion for the Outdoors